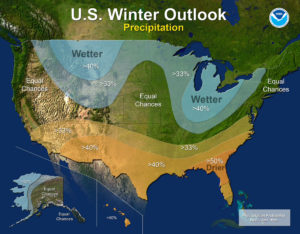 The air is crisp, the leaves are changing color, and it’s time to enjoy fall produce such as apples and pumpkins. But we all know winter is coming……will it pack the same kind of punch as last year?

The National Oceanic and Atmospheric Association, or NOAA, released its outlook for December through February, and forecasters believe it could be another cold and wet winter in the Northwest.

“If La Nina conditions develop, we predict it will be weak and potentially short-lived, but it could still shape the character of the upcoming winter,” according to Mike Halpert, deputy director of NOAA’s Climate Prediction Center.

How much snow will we get? That’s hard to pin down this early in the season. NOAA forecasters are generally unable to predict snowfall more than a week in advance due to the variable strength and direction of winter storms.

The “Snowpocalypse” of 2017 was rough for the Northwest, particularly onion growers in Idaho and Oregon whose storage facilities could not bear the weight of the snowfall. But Grasmick Produce worked hard to manage delays as quickly and efficiently as possible, keeping the delivery schedule on track. Our refrigerated delivery trucks are prepped for winter driving long before the snow flies, and our experienced drivers are well prepared for hazardous conditions on the road.

“Nearly all of our drivers have worked for the company through several Idaho winters and are accustomed to driving on winter roads,” says President Angela Grasmick-Reed.

NOAA will update the U.S. Winter Outlook in early November, and Grasmick Produce will be keeping an eye on the predictions to make sure we’re prepared for what’s ahead, rain or snow. Let us know if you have any comments on how we can best serve you in the months ahead.